Last May I had the chance to meet Prof. Tim Berners-Lee and one of the lead researchers in his team at MIT, Andrei Sambra, when I accompanied Giovanni Buttarelli, the European Data Protection Supervisor, in his visit at MIT.

Andrei presented then the SOLID project, and we had the opportunity to discuss about it with Prof. Berners-Lee, who leads the work for SOLID. The project “aims to radically change the way Web applications work today, resulting in true data ownership as well as improved privacy.” In other words, the researchers want to de-centralise the Internet.

“Solid (derived from “social linked data”) is a proposed set of conventions and tools for building decentralized social applications based on Linked Data principles. Solid is modular and extensible and it relies as much as possible on existing W3C standards and protocols”, as explained on the project’s website.

Andrei explains in a blog post that, in a first step, the project finds solutions “to decouple the applications from the data they produce, and then to decouple the data from the actual storage server.”

“This means that applications and servers are interchangeable, and they can be swapped without impacting the most important part – your data. It’s all about freedom of choice.” (Read the entire explanation in this blog post)

I was so excited to find out about the efforts conducted by Prof. Berners-Lee and his team. At the end of the presentation and the discussion, I asked, just to make sure I understood it correctly: “Are you trying to reinvent the Internet?”. And Prof. Berners-Lee replied, simply: “Yes”. A couple of weeks later I saw this article in the New York Times: “The Web’s creator looks to reinvent it” So I did understand correctly 🙂

I was excited because I found out about a common goal us, the legal privacy bookworms/occasional policymakers, and the IT masterminds have: empower the ‘data subject’, the ‘user’, well, the human being, in the new Digital Age, put them back in control and curtail unnecessary invasions of privacy for all kind of purposes (profit making to security).

In fact, my entire PhD thesis was built on the assumption that the rights of the data subject, as they are provided in EU law (rights to access, to erase, to object, to be informed, to oppose automated decision making) are all prerogatives of the individual that aim to give control to the individual over his or her data. So if technical solutions are developed for this kind of control to be practical and effective, I am indeed excited about it!

I also realised that some of the provisions that survived incredible, multifaceted opposition to make it to the new General Data Protection Regulation are in fact tenable, like the right to data portability (check out Article 20 of the GDPR, here).

This is why, when I saw that today the world celebrates 25 years since the Internet went public, I remembered this moment in May and I wanted to share it with you. Here’s to a decentralised Internet!

Later Edit: The man itself says August 23 is not exactly accurate. Nor 25 years! In any case, it was still a good day for me to think about all of the above and share it with you 🙂 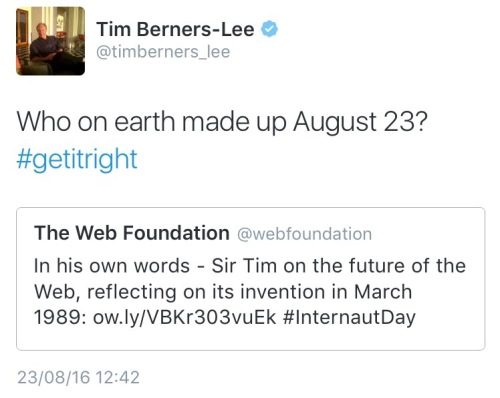